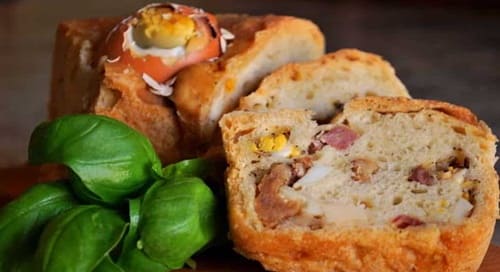 The Neapolitan casatiello, or tortano, is a typical recipe from Campania and can be sweet or salty.

A recipe of Neapolitan cuisine such as pizza  is casatiello or tortano.

The term casatiello derives from “chance”, which in the Neapolitan dialect means cheese, and alludes to the conspicuous presence of pecorino cheese inside it.

Casatiello is a typically Easter recipe but is now prepared any day of the year.

The quantities of the casatiello recipe are x a 24 cm diameter wheel (by wheel we mean a donut pan).

A typical recipe of Neapolitan cuisine, casatiello, or tortano, is precisely.

The difference between the casatiello recipe – traditionally considered the rustic characteristic of Easter – and the very similar one of tortano, which is eaten at any time of the year.

A difference that is essentially of cooking: in the casatiello the eggs are cooked whole in the oven, ending up taking on that unmistakable flavor of “roasted egg”; while in tortano, sodas are used and cut into wedges, distributed together with the salami and cheese cubes on the dough rolled out into a sheet, which is then rolled up.

Ingredients for the filling

Dissolve the yeast in the warm water
Make a fountain in the flour and add the yeast, lard, salt, pepper and pecorino
Mix everything until you get a homogeneous mixture
Continue to knead for 10 minutes until the dough is elastic and airy

Add the whole raw eggs (clean the shell well) and cover with two overlapping strips of dough to form a cross.
Leave to rise in the oven for about 3 hours (the dough will double in volume)
Preheat the oven to 170 ° and bake for at least 1 hour and a half or when completely browned.
Remove from the pan once cooled

Pakoca cake, a dessert made with peanuts

This website uses cookies to improve your experience while you navigate through the website. Out of these, the cookies that are categorized as necessary are stored on your browser as they are essential for the working of basic functionalities of the website. We also use third-party cookies that help us analyze and understand how you use this website. These cookies will be stored in your browser only with your consent. You also have the option to opt-out of these cookies. But opting out of some of these cookies may affect your browsing experience.
Necessary Sempre abilitato
Necessary cookies are absolutely essential for the website to function properly. This category only includes cookies that ensures basic functionalities and security features of the website. These cookies do not store any personal information.
Non-necessary
Any cookies that may not be particularly necessary for the website to function and is used specifically to collect user personal data via analytics, ads, other embedded contents are termed as non-necessary cookies. It is mandatory to procure user consent prior to running these cookies on your website.
ACCETTA E SALVA
error: Content is protected !!
Caricamento commenti...